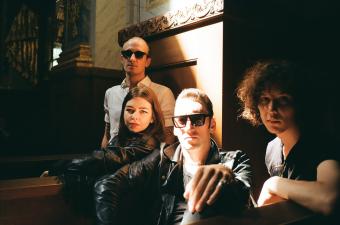 THE UNDERGROUND YOUTH + THE VACANT LOTS

The Underground Youth was started in 2008 as the creative project of Craig Dyer. Since then the band have released 10 albums and 3 EPs, slowly developing their unique sound, ranging from cinematic landscapes through to a raw and blistering style of post-punk. Over their decade long existence, The Underground Youth have developed a loyal global following and a cult fanbase, built by their extensive touring schedule through Europe, Asia and the USA. Signed to independent record label Fuzz Club since 2012, The Underground Youth currently consists of Craig (Vocals/Guitar), Olya Dyer (Drums), Max James (Bass) and Leonard Kaage (Guitar/Producer).
In 2016 Craig and Olya relocated from Manchester to Berlin, Germany, shortly followed by bass player Max James, who having previously played for The Smiths guitarist, Johnny Marr, joined The Underground Youth in early 2015. In Berlin the band recruited Leonard Kaage on guitar, the four piece live band that remains to this day. In their new Berlin based studio, and with Leonard as producer, The Underground Youth recorded and released on Fuzz Club their eighth album, ‘What Kind Of Dystopian Hellhole Is This?’, in early 2017. As with all their albums, this release was met with acclaim by the underground press. As a band that have somehow avoided the commercial lure of mainstream journalism, The Underground Youth consistently release albums that please and increase their cult fanbase around the world. While the band generally steer clear of supporting other artists in favour of playing their own headline tours, they have in the past chosen to support bands that inspired them, such as The Brian Jonestown Massacre and Slowdive.
The Underground Youth again toured extensively around Europe in support of the album and played sold out shows for the first time in Russia, through the Balkans and in Tel Aviv. Festival slots at Wave-Gotik-Treffen, Levitation France, Grauzone Festival and Synästhesie Festival built the band’s European presence further than the scene they were already established within.
In late 2018 the band entered the studio to begin recording again and were joined by Kristof Hahn from the inspirational band Swans, who featured on the album playing lap steel guitar. In March 2019, ninth album ‘Montage Images Of Lust & Fear’ was released and the band took to the road on their longest tour to date, touring for the first time through China, Japan and Taiwan and returning to Europe to spend over two months playing non stop through over twenty countries. On returning, The Underground Youth spent time between festivals building a new studio in Berlin where they intended on recording their tenth album on return from a tour of the USA and Canada in early 2020. Unfortunately, due to the COVID-19 pandemic, the tour was cut short and cancelled and the band had to return to Berlin for the lockdown period. During the isolation of 2020, Craig and Leonard each set up home recording spaces in their respective apartments and recorded their tenth album, ‘The Falling’, which will be released on 12th March 2021 and has already, ahead of release, developed high praise with print reviews in magazines and publications such as Uncut Magazine, Shindig! and Mojo Magazine.