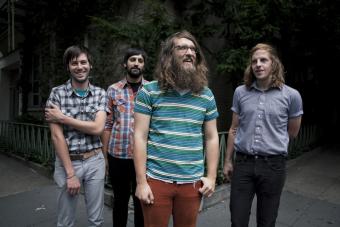 Maps & Atlases return to Europe in support of their sophomore album ‘Beware And Be Grateful’ which is due for release on 16th April. The band have not toured since the release of their last album ‘Perch Patchwork’ – a tour that boasted sell out shows in London and Brighton.

Musically, ‘Beware And Be Grateful’ is a mature progression for the band, who started life being labelled as ‘math-rock’, and have now found themselves writing intelligent pop music which will no doubt contend for radio playlist spots. The band, made up of David (guitar, vocals), Erin (guitar), Shiraz (bass) and Chris (drums), are known for putting on a terrific live performance, which often ends in an intimate acoustic set for any fans who don’t rush off after the last song.