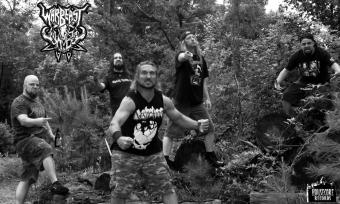 On their second full-length album for Housecore Records, Destroy, Warbeast unleashes an uncompromising and unbridled thrash assault. Living up to its moniker, the collection sees the Texas outfit sharpen their claws and bare their teeth even more than before. Now, the band—Bruce Corbitt [vocals], Scott Shelby [lead guitar], Joe Gonzalez [drums], Bobby Tillotson Jr. [lead guitar], and Dré Karst [bass]—stands primed to engage full-on musical destruction. You have been warned...

In the spring of 2012, Warbeast hunkered down to record Destroy with legendary Pantera and Down frontman and label founder Philip H. Anselmo behind the board. While locked in Anselmo's studio, Nodferatu's Lair, they set their sights on upping the ante across the board from their 2010 Housecore Records debut, Krush The Enemy.

In addition to pulverizing riffs, pummeling double bass, and powerful leads, the singer focused on lyrically tackling different topics and delivering them via razor sharp hooks.
The record also sees the group's lineup solidified with the addition of Karst on bass replacing original bassist Alan Bovee and Shelby assuming the bulk of the six-string writing after the exit of previous guitarist Rick Perry two years prior.

The live show proves equally impressive. They've already massacred crowds alongside the likes of Down, Crowbar, Eyehategod, Gwar, Every Time I Die, Cavalera Conspiracy, Destruction, Goatwhore, OTEP, and countless others. With numerous tours on the horizon, they'll undoubtedly be slaying cities everywhere. About the live show, Shelby smiles, "We always like to attack the audience with our songs and move them. That's our approach as soon as we hit the stage."

Building up to the release of Destroy, two Warbeast tracks "It" and "Birth of a Psycho" share a split with Anselmo's solo material entitled, War of the Gargantuas. It's only a prelude of what's to come though.
The group remains entrenched in thrash's legacy, while furthering its future. Formed in 2006 and counting Rigor Mortis, Gammacide, and Demonseed among their sonic genealogy, the members have been respectively doling out crushing music for over two decades. That's precisely why Warbeast sound so alive on Destroy.

At the end of the day, it's about unmitigated destruction for these five individuals. "I want people to feel like they've been hit with a sledgehammer ten times in a row when they hear this," concludes Corbitt. "As long as they feel strongly about, we've accomplished our mission." — Rick Florino, July 2012